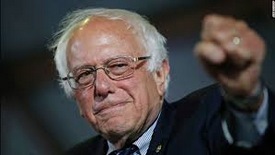 People on or near the periphery of the political left are normally quick to endorse alternatives to the major political party candidates. America's most famous democratic socialist, Bernie Sanders, runs for his senate seat as an independent.

Byron Brown is a Black man who wins elections in Buffalo with its one third Black population. Running a write-in campaign is enormously difficult and rarely successful in any circumstances.

(Politico)Buffalo Mayor Byron Brown infuriated progressives with his winning write-in campaign last week against the democratic socialist who beat him in the primary.

Now prominent left-wing Democrats are calling for the veteran New York mayor’s head, urging Democrats to strip Brown of his position on the Democratic National Committee.

“When you pull a stunt like this, somebody wins a primary, a working-class woman, and you go to every rich donor in both parties to fund a write-in campaign … it’s a disgrace,” said Larry Cohen, chair of the Bernie Sanders-aligned group Our Revolution.

Cohen, a DNC member himself, said he plans to organize an effort to press Democrats to remove Brown from his post on the national committee. And on Monday, India Walton, the unsuccessful Democratic nominee for Buffalo mayor, threw her weight behind the move: “Not only do I support the DNC revoking Byron Brown's post; I believe it would set a dangerous precedent not to,” she said in a statement to POLITICO.


The views and claims expressed by contributors are their own and do not necessarily reflect the views and beliefs of SelectSmart.com. Not every statement made here can be assumed to be a fact.
Comment on: "The sour grapes hypocrisy of Bernie Sanders acolytes."