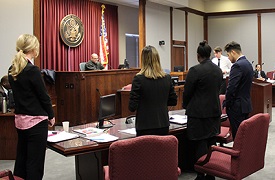 Oh, somewhere in this favoured land the sun is shining bright,
The band is playing somewhere, and somewhere hearts are light;
And somewhere men are laughing, and somewhere children shout,
But there is no joy in MAGA world—mighty Durham has struck out.


Alexandria, Virginia CNN — Igor Danchenko, the primary source for the infamous Trump-Russia dossier, was acquitted Tuesday of four counts of lying to the FBI in an embarrassing defeat for special counsel John Durham.

Durham has taken two cases to trial, and both have ended in acquittals. After more than three years looking for misconduct in the FBI’s Trump-Russia probe, Durham has only secured one conviction: the guilty plea of a low-level FBI lawyer, who got probation.

The jury returned not guilty verdicts on all charges against Danchenko, a Russian expat and think tank analyst who provided the bulk of the material for the anti-Trump dossier. Durham initially charged Danchenko with five counts of lying to the FBI, but a judge threw out one of the charges on Friday.


The views and claims expressed by contributors are their own and do not necessarily reflect the views and beliefs of SelectSmart.com. Not every statement made here can be assumed to be a fact.
Comment on: "MAGA world weeps: Source for Trump-Russia dossier acquitted. John Durham strikes out after 3 years of trying."