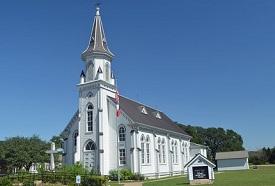 Cordileone has now upped the ante by grandstanding on the issue and picking a fight with the most powerful woman – and second-most powerful Catholic — in American politics. His attack on Pelosi comes as conservative justices on the Supreme Court are poised to play a key role in reversing legal precedent to overturn abortion rights. This decision promises to further polarize American politics and strip away a key health right crucial to preserving the health and safety of tens of millions of women. Many women will die if the court goes through with this decision.

On Saturday, I checked out Twitter and noted, among what was trending, "Tax the Churches," something that I favor so I clicked on it.

Come to find out, this was a cranky response of pi$$ed off Blue MAGA Swampcultists to Archbishop Cordileone standing up for Church teaching and applying it to Nancy Pelosi and her hypocrisy on abortion.


The views and claims expressed by contributors are their own and do not necessarily reflect the views and beliefs of SelectSmart.com. Not every statement made here can be assumed to be a fact.
Comment on: "Editorial: Attack on Nancy Pelosi should be San Francisco archbishop’s final act here"