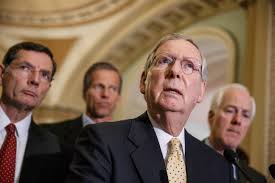 "Mitch lied to us.

Following the Jan. 6 insurrection, Senate Minority Leader Mitch McConnell (R-Ky.) made it clear he thought then-President Donald Trump was responsible for the violence. The Trump-loving rioters "did this because they had been fed wild falsehoods by the most powerful man on Earth — because he was angry he'd lost an election," he said in an instantly famous speech at the end of Trump's second impeachment trial.

But, darn it, McConnell was just too principled to actually vote for Trump's conviction. It wasn't the constitutional thing to do, you see — Trump had already left office, which made the impeachment effort a dead letter..."

I told you all, from the moment that Mitch was sayin, in effect, "I despise Trump. I think he's despicable, but this ain't impeachable."

And, I want to thank the writer, Joe Mathis...and, especially, isle, for your continuing TDS-generated angst.

It was clear as crystal, to the unaffiliated, that, in that speech, Mitch was saying, "I ain't gunna impeach." I called it! But, so many of the deranged gave into their addiction, their disease. And, now, this article. Waaaaaaaaaay more than a year later...


The views and claims expressed by contributors are their own and do not necessarily reflect the views and beliefs of SelectSmart.com. Not every statement made here can be assumed to be a fact.
Comment on: "This guy has the same TDS variant as isle"